Like all financial euro area institutions, Pfandbrief banks are subject to the European Single Supervisory Mechanism (SSM). The various banking supervisory authorities give effect to the regulatory requirements in European or national provisions and carry out the Supervisory Review and Evaluation Process (SREP).

The legal bases of supervision are essentially set down in the following European legislation:

Also, for Pfandbrief banks, the German Pfandbrief Act (Pfandbriefgesetz, PfandBG) is of importance.

Specification of the regulatory requirements

Banking supervisory authorities issue bulletins giving more detail on regulatory requirements. On the European level, the European Banking Authority (EBA) sets guidelines. These guidelines are to be applied in full, in part or not at all by the competent authorities (for German institutions, the ECB banking supervision or BaFin) on a “comply or explain” basis. In addition, the competent supervisory authorities are specifying the regulatory requirements through further pronouncements.

As part of its “Single Rulebook Q&A” process, the EBA also performs interpretation of the CRD and the CRR, although this is not directly binding on institutions. Finally, the competent authority decides whether it adopts an EBA Q&A into its administrative practice. The ECB banking supervision and BaFin generally adopt the EBA Q&A.

The ECB banking supervision also develops supervisory methods and standards, inter alia, in the form of manuals, guides, and regulations, that are effective for the entire Single Supervisory Mechanism (SSM).

Additionally, BaFin and the Deutsche Bundesbank also publish interpretive decisions, guidance notices, circulars, and administrative acts, which are primarily relevant for institutions supervised directly by them. These include, for instance, the guidance on the supervisory assessment of bank-internal capital adequacy concepts.

Regarding real estate financing, the so-called hard test should also be emphasized. Based on the losses from real estate financing reported by the institutions, BaFin decides whether a well-developed and long-established real estate market exists. If the hard test is met – as has been the case in Germany for many years – real estate financing will benefit from regulatory privileges (see also CRD/CRR, European regulations). The publicly available data on losses per outstanding loans are as follows: 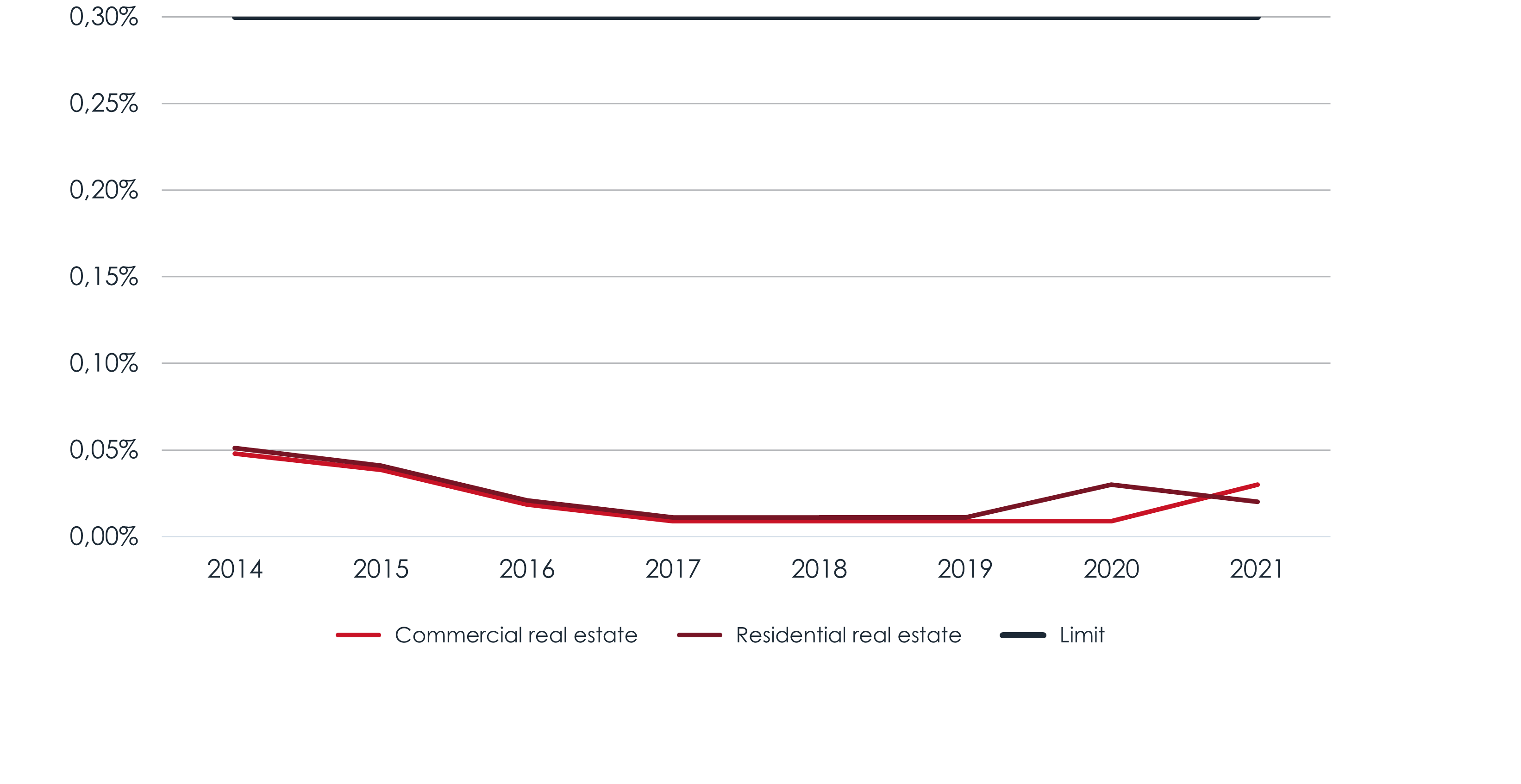 The SREP is used to verify and assess both an institution’s risk situation/controls and the associated adequacy of its internally determined capital and liquidity (ICAAP and ILAAP). These are based on the EBA’s SREP guidelines. On-site inspections, the supervisory review of internal stress tests, and supervisory benchmarking of internal approaches constitute the main supervisory activities, the results of which are included in the SREP. Based on EBA guidelines, the SREP follows what is known as the “Pillar 1 plus” approach, in which the minimum requirements of Pillar 1 (pursuant to the CRD/CRR) are supplemented by institution-specific supervisory capital requirements covering risks not or not sufficiently taken into account in Pillar 1 (e.g. interest rate risk in the banking book) - so-called Pillar 2 requirements in accordance with §6c of the German Banking Act.

Several EBA working groups started drafting the guidelines and regulatory technical standards (RTS) for interest rate risk in the banking book (IRRBB) mandated in the CRD (Articles 84 and 98) in September 2020. The following papers are involved:

The EBA published the final guidelines and the final drafts of the two RTS in October 2022. The entry into force of the requirements as well as the first application is expected to take place in the course of 2023 and 2024.